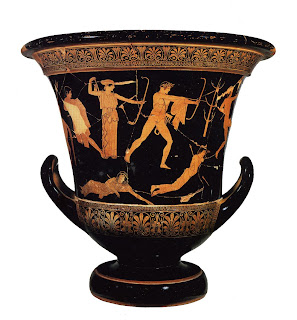 In planning the Artemis and Apollo costumes for Courtney and I, I figured that it would be important to start with the symbology that identified these Gods in Greek art and other depictions. Unlike the painting on this krater, though, I will not be naked. Promise. 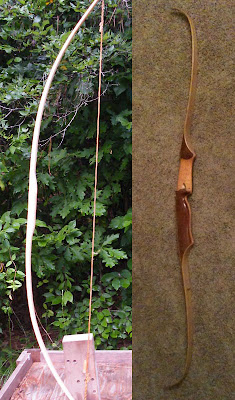 I figured that I could find couple of decent looking toy bows to use with our costumes, but I was wrong. I couldn't find a single toy bow that came anything close fitting the time period. I used to shoot a bow, years ago, so I thought that it might also be a good excuse to pick up a recurve bow that I can use to shoot targets next spring and summer. They ended up being more expensive than I thought (like, crazy expensive), so I decided to get a smaller, inexpensive training bow for Courtney's costume and I won an auction on eBay for a very used vintage recurve bow for myself. I plan to teach Macey to shoot the training bow, if she's willing. I guarantee that she will be. :)

These images are in no way close to scale with each other. The recurve bow (right) is a good 18" longer than the training bow (left).

The training bow came with a bowstring, a silly little quiver, and some target arrows with neon-colored fletching. The recurve bow came as-is, with nothing but the bow. I figured that since we wouldn't be shooting these until sometime next spring, I'd put away the quiver and arrows, and just pick up a string for the recurve bow. That way they can still act as props for our costumes and be used for target shooting later, without the danger of having a functional bow and arrow at our Halloween party. If I said that it was the kids shooting it that worried me, I'd be lying.

I figured that the laurel wreaths would be very easy to come by, but, once again, anything I could find at a costume store or website didn't fit what I was looking for at all. I found a nice"earthy" wreath on eBay that I thought would go well with Courtney's dress, but I wanted a completely golden one for my Apollo costume. With retail and the internet failing me - I decided to make my own.
I really didn't feel like putting any thought into the lyre. I figured that a bow and a crown of laurels for each of us would do the trick. Plus, the guitars are guaranteed to come out at some point in the evening, so I'll strum a few chords and call it good.